HALLANDALE BEACH, Fla. (Saturday, January 17, 2015) – California Chrome, last year’s Kentucky Derby and Preakness winner, has won the 2014 Horse of the Year, which was announced Saturday evening at the 44th annual Eclipse Awards, presented by Daily Racing Form, Breeders’ Cup and The Stronach Group. The Eclipse Awards, held at Gulfstream Park, honor excellence in Thoroughbred racing and are voted on by representatives of the National Thoroughbred Racing Association, Daily Racing Form (DRF) and the National Turf Writers And Broadcasters (NTWAB).

Owned by Steve Coburn and Perry Martin, and trained by Art Sherman, California Chrome finished first in the Horse of the Year balloting with 143 votes, followed by Flaxman Holdings’ Main Sequence, the Older Male and Male Turf champion, with 53 votes; Kaleem Shah’s Breeders’ Cup Classic winner Bayern, with 36  votes; Jungle Racing and partners’ Shared Belief, with 12 votes; the champion 3-year-old filly Untapable with 11 votes and 2012 and 2013 Horse of the Year Wise Dan with six votes, among the leading vote recipients.

California Chrome was also voted the 3-year-old Male champion earlier in the evening.

In addition to the Kentucky Derby and the Preakness Stakes, California Chrome, a son of Lucky Pulpit, won the California Cup Derby, the San Felipe Stakes, the Santa Anita Derby, and the Hollywood Derby on turf. He was thwarted in his bid to become racing’s 12th Triple Crown winner when he finished fourth in the Belmont Stakes. Following a summer layoff, California Chrome finished sixth in the Pennsylvania Derby and finished third by a neck in the Breeders’ Cup Classic at Santa Anita Park. He finished 2014 with $4,007,800 in total earnings for the year. 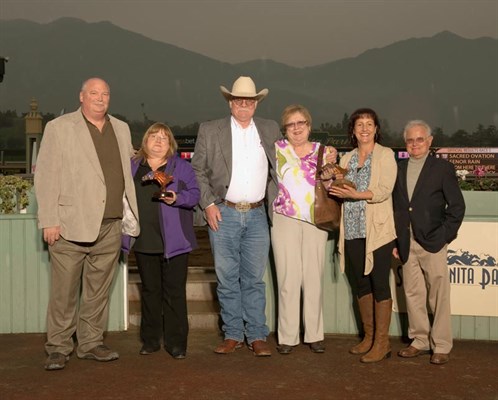 In voting that concluded January 4, 2015, Eclipse Awards voters cast their ballots to rank the top three horses and individuals in each Championship division on a 10-5-1 point system basis. This voting established the top three finalists in each division, whose names were released on Jan. 7, 2015.

The winner of the Award of Merit, voted on by a panel of representatives from the three presenting organizations and previously announced, is Tom Durkin. The Award of Merit is presented to honor outstanding lifetime achievement in the Thoroughbred industry.

The winner of the Special Award, voted on by a panel of representatives from the three presenting organizations and previously announced, is Old Friends Farm. The Special Award honors extraordinary service, individual achievements in, or contributions to the sport of Thoroughbred racing.

Media Eclipse Awards also are given in the categories of photography, audio and multi-media Internet, news/enterprise writing, feature/commentary writing, national television-feature and national television-live racing programming to recognize members of the media for outstanding coverage of Thoroughbred racing. The 2014 Media Eclipse Awards winners, determined by a judges’ panel for each category and previously announced, are:

Eclipse Awards are bestowed upon the Thoroughbred horses and individuals whose outstanding achievements have earned them the title of Champion in their respective divisions. The Eclipse Awards are named after the great 18th-Century racehorse and foundation sire Eclipse, who began racing at age five and was undefeated in 18 starts, including eight walkovers. Eclipse sired the winners of 344 races, including three Epsom Derbies.